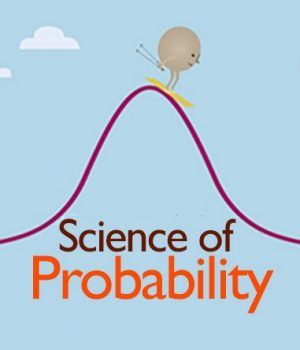 Probability is one of the most exciting branches of Mathematics. It helps the user in analyzing a random phenomenon. It is not possible to determine the results of an event before its occurrence. However, it is known that there are only a limited set of feasible outcomes. The final solution or number will be one of those outcomes only. The determination of the chance of occurrence of those results is done by using probability.

It is one of those mathematics streams, for which no one ever questioned the application in day-to-day life. In ordinary conversation, the term probability has multiple meanings.

In this article, we will discuss the advancement and utilization of the statistical principle of probability.

Interpretation of Probabilities as Relative Frequencies

We commonly apply this theory in solving simple cards, dice, coin games, and roulette/ gambling wheels. The distinctive aspect of such games where winning or losing doesn’t depend upon science or logic is that the result cannot be pre-decided or anticipated with certainty. However, the pooled results of multiple tests show some predictability.

For example: According to the relative frequency interpretation, the possibility of “tails” in a coin toss is one-half or fifty percent. This states that in numerous trials, the relative frequency with which “tails” actually appears, as a result, will be nearly one-half. However, it doesn’t provide any inference concerning the result of any given coin toss.

There are several examples of interpretation of probabilities as relative frequencies, including genes, groups of people, molecules of gas and more. Similarly, proclamations about life’s longevity for persons of a particular age refer to the combined experience of numerous people but do not imply what will happen to any specific person.

The fundamental element of probability theory is a repetitive experiment, at least theoretically repetitive, under essentially similar circumstances. It may result in different conclusions on different experiments. The group of all likely results of an experiment is known as “sample space.”

Example – Single flipping of a coin provides a sample space with two likely results, “heads” and “tails.” The experiment of flipping a pair of dice has a sample space with 36 possible outcomes. These outcomes can be seen as a well-ordered pair (a, b), where a and b take up one of the values one, two, three, four, five, six and represent the sides displaying on the individual dice. It is essential to consider dice as recognizable (considering a contrariness in size or color) so that the result (6, 1) is distinguishable from (1, 6).

A definite subset of the sample space is known as an event. For example, the event (the addition of the faces displaying on both dice equals four) comprises the three outcomes (1, 3), (2, 2), and (3, 1).

The Principle of Additivity

Assume the probability of the incident “tails do not appear” in the m tosses.

The result of an experiment is an m-tuple (an ordered set with m elements), considering the fth entry is the fth toss result.

The number of elements in sample space = 2m.

Out of all these, only one outcome matches having no tails, so the expected probability is 1/2m.

Determining the probability of “at most one tail” will be slightly more complicated.

Apart from a case in which no tail occurs, there are m cases where precisely one tail occurs because it can occur on the first, second,…, or mth toss.

Bi means two or twice. In this context, it is about the experiment with only two possibilities. As per probability theory, a binomial distribution is the likelihood of a Yes or No or success/ failure or A/ B ) the outcome in a survey or an experiment that is repeated multiple times. A simple example of binomial probability is tossing a

coin. Either it can be heads or tails. Another example can be an exam result; it can either be passed or fail.

The probability of counts for each side of an m-sided dice rolled n times is an example of multinomial probability.

Eg: Tossing two dice three times and recording the result of each toss.

Each toss can give a discreet number of possible outcomes. Throughout the experiment, the probability of any outcome is constant. The tosses are independent of each other. The result or occurrence of one toss does not affect the event or result of another toss.

Independence is one of the essential concepts in probability theory. We believe that the two events are independent if one event’s occurrence doesn’t change the possibilities of the other event.

Here is an example of independence in probability.

Event X = flipping of a coin

Here is a simple example of conditional probability –

Event X = It is raining outside.

Event Y = Your need to step outside.

A real-life example of Bayes’ theorem is calculating the probability of the risk of giving money to future borrowers.

These are some basics of probability in science and its application in daily life. It is a crucial concept for students. A clear understanding of the fundamentals of probabilities can help them in learning more advanced topics and theories.

Probability is a vital concept for those who are interested in learning data or statistics. It is very helpful in daily decision making. It helps people to analyze and take calculated risks. A data scientist is one of the upcoming and lucrative career choices. Knowledge of probability will help them understand what is data and how it can be utilized in various ways. If your child is facing any difficulties in grasping the concept, you can help him by providing outstanding teachers’ help and guidance at Cuemath. They create a tailored learning path for each student

based on their need and style of learning. The learning plan is focused on various concepts and theories that your child might struggle with.

As parents, we try to provide them with the best resources available. Cuemath ensures that each student grows academically and is encouraged to ask questions and solve doubts.

If you are not sure, you can also book a free trial class and give your child an experience of a personalized learning plan. Based on the child’s experience and understanding of a concept, you can continue or discontinue the classes.

Follow us on social media and do check other article,iTechWays

What are the advantages of MongoDB?