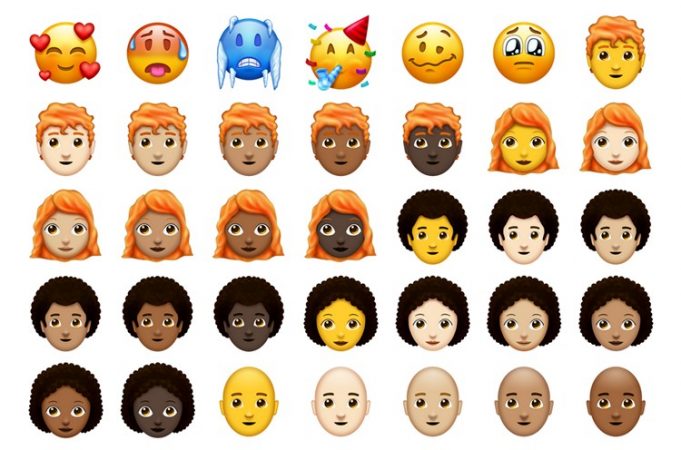 Digital conversations are overpowering the way people communicate with each other. People are using different applications online to make conversations more exciting and exciting. Most of the present phones contain emojis in which you can easily express your thoughts, feelings, and emotions.

Great minds created vast numbers of emojis that you can use in any conversation. Now they are almost complete from the face and emotions, to food and drink emojis, to people and body, animal and nature, activities, objects, travel and places, symbols and flags. Below are some samples of emojis you can use with friends.

This nerd emoji is a yellow colored face with a smile emoji that wears an old school style of black eyeglasses with two teeth showing in front. This emoji is inspired by a typical old school nerd that is racist, for it mocks the Eastern Asians. It features a white-colored glasses in some other devices, but they all wear a smile and glasses.

People tend to use this emoji if they want to let their friends know that they are smart, intelligent, wise, knowledgeable, and Mr. or Miss know it all. You can use it when gossiping about a particular person who wears glasses most of the time or represents eyeglasses.

The worried face emoji is usable in several situations involving mostly unfortunate scenarios. To sincerely show someone that you are concerned regarding their current situation, you can use the worried face emoji. It has a yellow face with furrowed eyebrows and open eyes, somewhat emphasizing a remorseful expression.

Everybody needs a shoulder to lean on nowadays, and you probably have encountered the same. Whether you are the one in need of emotional support, or you are the person being approached for help. You can add the worried face emoji to better express yourself in these difficult times.

The Not Feeling Well Face Emoji

This emoji is common these days, especially the rainy ones. It means that a person is being hospitalized or has a cold or flu. This emoji is described as a yellow-faced one with raised eyebrows and has a thermometer in its mouth. It has a red cheek to make it look feverish. The not feeling is similar to the nauseated emoji face.

The not feeling well emoji can also be used in different conversations like, if you feel disgusted with someone, you want to decline an invitation. This emoji has a diverse representation and style depending on what type of device or app you are using but with the same meaning.

This emoji is known as the smiling face emoji that has sunglasses on. It is the yellow-faced emoji with a big smile on it, and its eyes are covered with black eyeglasses as if it advertises the famous wayfarer brand. The emoji means that you are relaxed and good looking.

This emoji may also express three other things with this facial expression. One is you being confident with your life or answer, second if you have done something excellent and want to boast yourself to your friends, and lastly, is if you’re going to portray a carefree attitude. This emoji is somewhat similar to the nerd one but with an opposite meaning.

The Smiling Face With Horns Emoji

The smiling face with horns emoji is the one with the purple face that has two devil horns, with two wide eyes, a grin, and has two eyebrows scrunched downwards as if it looks angry and a smiley face. It looks almost the same with an angry face but with different meanings and purposes.

This emoji is best when you want to convey a naughty conversation, an excitement towards something, or excellent on some achievements. You can use this emoji when you want to get kinky with your partner or girlfriend. You can also use this when you are feeling devilish or having bad behavior or planning on having revenge.

This money mouth emoji is a yellow-faced emoji with two raised eyebrows, two eyes converted to dollar signs, and a genuine smile with a sticking out tongue colored in green and styled with a dollar sign on it. You can use this emoji depending on the situation. Like a person in love with his or her wealth, or someone dealing with money.

This emoji may also convey someone who is feeling rich and famous, or if you want to portray that you are successful in your career or are just excellent at something. You can also use this if you are feeling rich and you want to treat your friends with some good food.

The Winking Face With Tongue Emoji

This emoji is a yellow face that sticks its tongue out and makes a cute, zany wink, has its right eye closed, and the left eye open. The meaning of the winking face with tongue emoji is being wacky, buffoonery, having fun, or being excited about something.

Our daily lives now keep on revolving to our devices, whether it is a mobile phone, laptop, computer, tablet, etc. We tend to use our phones whenever we feel bored or if we need to be entertained, we get to grab our devices and stare at them all day. Using emojis makes the conversation more addictive because of the different types of emojis available.

All About Business Solutions for Video Streaming